The Senior School at Ursula Frayne Catholic College caters for students in Years 10, 11, and 12. Preparation for life beyond secondary school is a key focus in the Senior College. This preparation incorporates two aspects: the pastoral pathway encouraging resilience, independence and social awareness, and the individual academic pathway promoting excellence in scholarship.

Our aim is for our students to exit the College feeling positive, self-assured, with the confidence to face the future with hope and optimism. To this end, we challenge and support every individual student and develop their skills and abilities, helping them to achieve their  maximum potential.

We expect and maintain high academic standards and the pursuit of excellence in all respects. It follows that we only accept the highest standards of behaviour and seek the support of parents in helping us to achieve our goals. We believe relationships are at the heart of learning and we want our students to feel connected to each other, our community and the College.

Ursula Frayne Catholic College has established the Senior School as a separate sub-school entity – "a school within a school". The Senior School model acknowledges that the emotional and psychological needs of adolescents aged between 14 and 17 are significantly different to younger children. As a result, educational methodology in and out of the classroom needs to reflect this difference. Older adolescents need to be exposed to greater freedom and independence in order to promote their personal development and growth. The structure and functioning of senior school addresses these different needs.

Senior school students are given more rights, privileges and responsibilities. In a sense, the aim of senior school is to accelerate the process of personal and academic development by exposing students to a wider variety of opportunities and experiences.

To this end, the Senior School curriculum at Ursula Frayne Catholic College has the goal of providing students with the opportunity to select courses according to their specific needs, interests, and career path. A number of checks and balances have been established to ensure that the College maintains high standards of academic rigor and that all students strive for academic excellence. The College places great importance on the extension of students.

In Senior School, we recognise that students are at different starting points, they learn at different rates and they bring a wide range of previous experiences to their learning. For these reasons, students are involved in intensive career coaching where the students are assisted in goal setting and personal course design. Students are encouraged to set academic goals and their progress is closely monitored to assist them to meet these goals.

The selection of appropriate subjects that suit individual student's needs is  crucial. Ursula Frayne Catholic College provides individual counselling for each Senior School student to assist them in the subject selection process. The parents of each student in Years 10 attend an interview with the course counsellor for the purpose of selecting subjects. The College boasts an experienced, energetic and talented teaching staff committed to the pursuit of academic excellence. The one-on-one counselling, coupled with the meticulous review of students' performance and ongoing counselling throughout years 10 to 12, is the key to the outstanding results achieved by our students.

The teaming of students and teachers into small groups is a key feature of the Senior School. The Senior School at Ursula Frayne Catholic College is divided into three sub-groups or Clusters. Each Cluster is comprised of a Cluster Leader and five Form Teachers.

Ursula Frayne Catholic College promotes the balanced development of our students within a community atmosphere.

Young people need support and encouragement during the Senior School. This is put into practice through a caring but disciplined environment designed to make students feel safe and confident to develop their potential.

To improve the care for each child, the Senior School is divided into three separate Clusters; Xavier, Siena and McAuley

Each Cluster has a Cluster Leader and five Form Teachers. The Cluster Leader is responsible for the overall co-ordination and organisation of their Cluster. The Form Teacher is the link between school and home for general information concerning a student's academic progress, study, attitude, attendance and general wellbeing at school.

Parent-Staff communications are an integral component of the Pastoral Care Programme for students at Ursula Frayne Catholic College and the Form Teacher or the parent/guardian is encouraged to initiate communication by SEQTA and email.

To guide students, clear expectations of their rights and responsibilities are set down.

Crest: Catherine of Siena is often seen in pictures holding the lily flower. The scroll represents the 300 or more letters she wrote which are considered one of the great works of her Tuscan literature. Her writings led to her being known as a Doctor of the Church. The heart is in reference to the legend that she changed hearts with Christ. 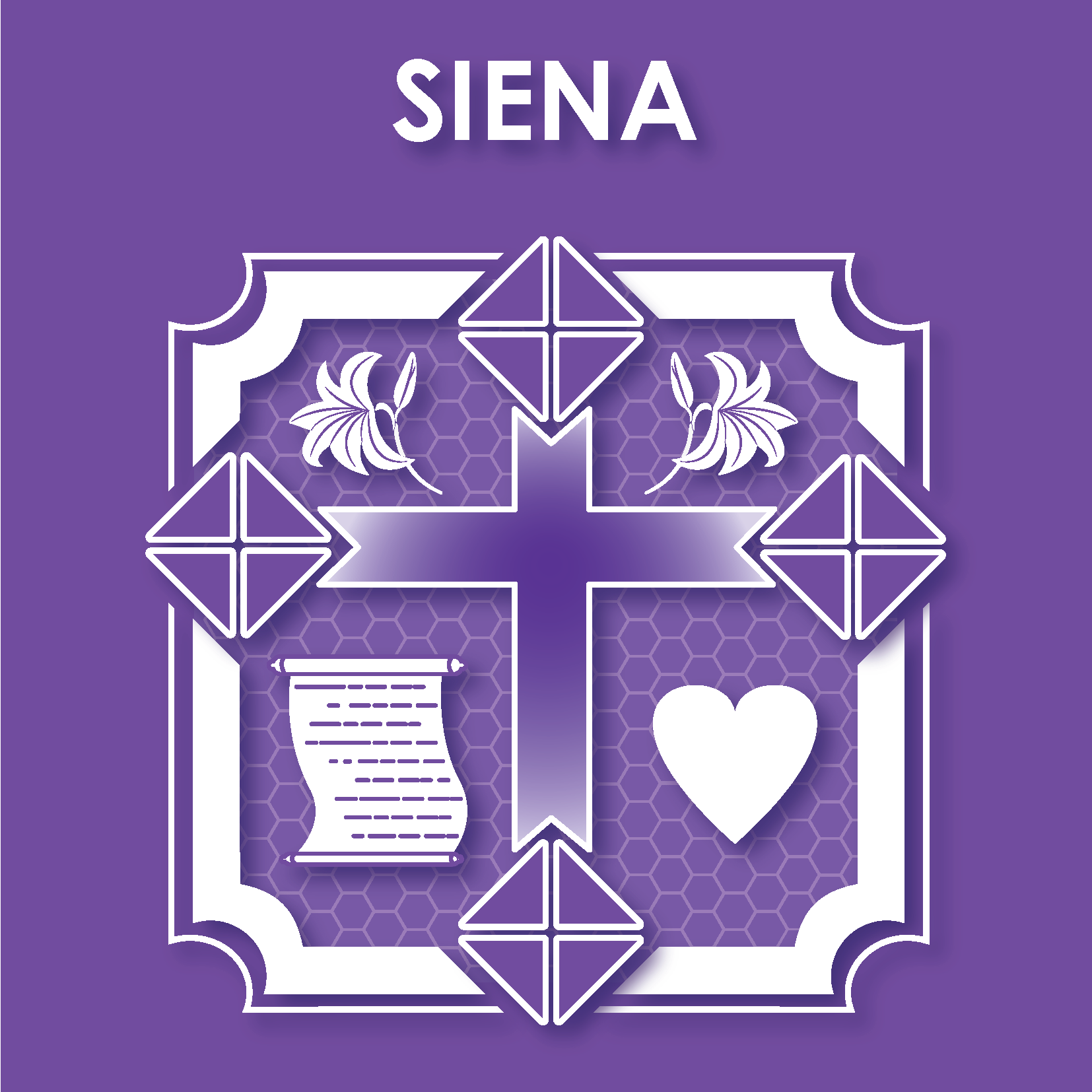 God of Wisdom, you made our sister, Catherine, burn with divine love in contemplating the Lord's passion and in serving your Church. May your people, with the help of her prayers, united in the mystery of Christ, rejoice forever in the revelation of his glory, who lives and reigns with you and the Holy Spirit, God for ever and ever.

In selecting Catherine of Siena as our patron saint, it was particularly important to select a strong and devout female. She was an excellent example of a woman who followed the will of Jesus. Our school motto exalts the virtue of being Centred in Christ. Catherine's life was a living example of this.

Catherine was born in Siena on 25 March 1347. She was one of the greatest women who ever lived. When she was a little girl, Our Lord appeared to her saying: "Please give me your heart". She gave it willingly and Jesus gave her his Sacred Heart in return. She is also revered for her writing. She was only 33 when she died. The whole world knew this saintly girl. They loved this brave woman.

Crest: The crest has four images: My God I am yours for time and eternity: teach me to cast myself entirely into the arms of your loving providence with the most lively unlimited confidence in your compassionate tender pity.

Grand, O most merciful redeemer, that whatever you ordain or permit may always be acceptable to me: take from my heart all painful anxiety; suffer nothing to sadden me, but sin; nothing to delight me but the hope of coming to the possession of you, my God and my all, in your everlasting kingdom.

Catherine McAuley founded the religious order of the Sisters of Mercy. She was an excellent role model for the qualities of practical love, care and compassion, which we would hope to instill in our students. Furthermore, in 1845, one of the young members of her order, Ursula Frayne, established the first Sisters of Mercy foundation in Perth. One of our founding schools, Our Lady of Mercy, which became St Joachim's High School was founded by the Mercy nuns.

Catherine McAuley was born in Dublin, Ireland in 1778. From a young age, she was a spiritual woman and the early death of her father was at least partly responsible for her commitment to Catholicism. Moreover, she believed she was called by God to work with the poor. Throughout her adult life, she did a lot to help the poor, sick and dying, particularly women. This led to her using a large inheritance to provide a home for the training and religious instruction of poor young women in 1827 (House of Mercy). She confirmed the rights of the sisters to be 'walking nuns' i.e. they were able to go out into the community to help the poor rather than wait for the poor to come to them.

Crest: The crest has four images: 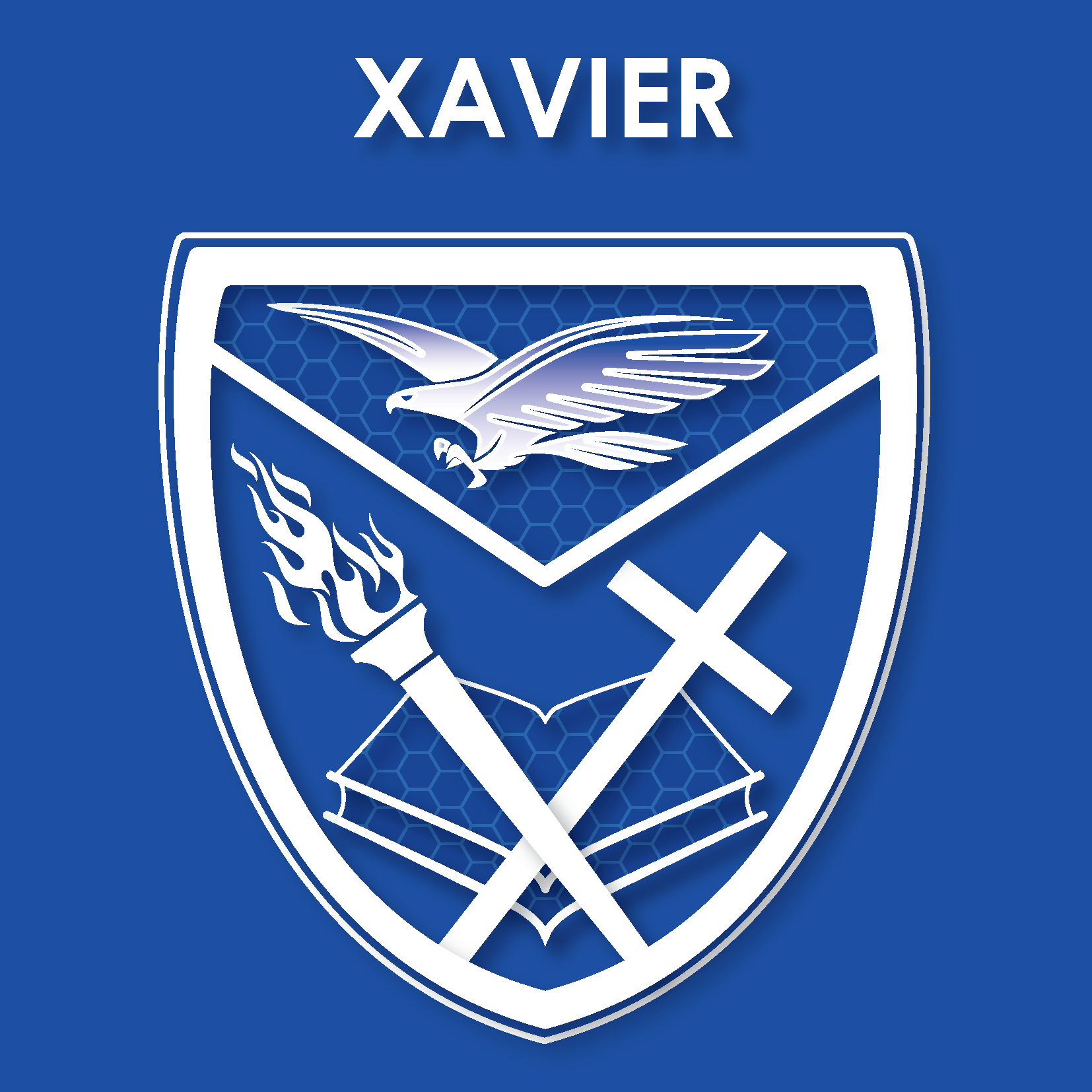 By the preaching of St Francis Xavier you brought many nations to yourself. Give his zeal for the faith to all who believe in you, so we may ever be faithful to the Gospel. We pray that we may live our Christian calling, and that we are true to ourselves, to our families, and to our community.

We ask this through Christ our Lord, Amen.

Francis Xavier was born in 1506. He had planned a career as a professor however his friend, Saint Ignatius of Loyola, convinced him to use his talents to spread the Gospel. He was one of the founding Jesuits and the first Jesuit missionary priest.

He travelled thousands of miles, mostly with bare feet, tolerated the most appalling conditions on long sea voyages, endured extremes of heat and cold. He had the gift of tongues, was a miracle worker, a prophet, a healer.

Xavier College was one of the founding schools of Ursula Frayne Catholic College. It catered for boys and was based at the current Balmoral Street Campus in East Victoria Park.

Xavier Cluster is committed to our faith. We seek to be courageous and energetic in our daily lives. With determination to succeed, we will strive for excellence in all we do. 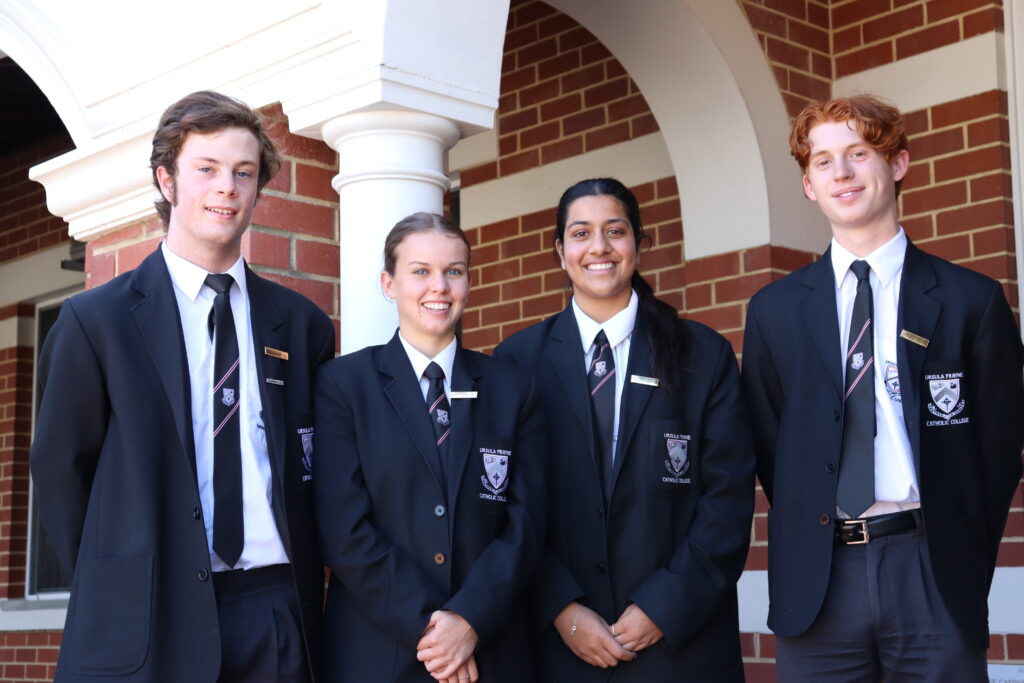 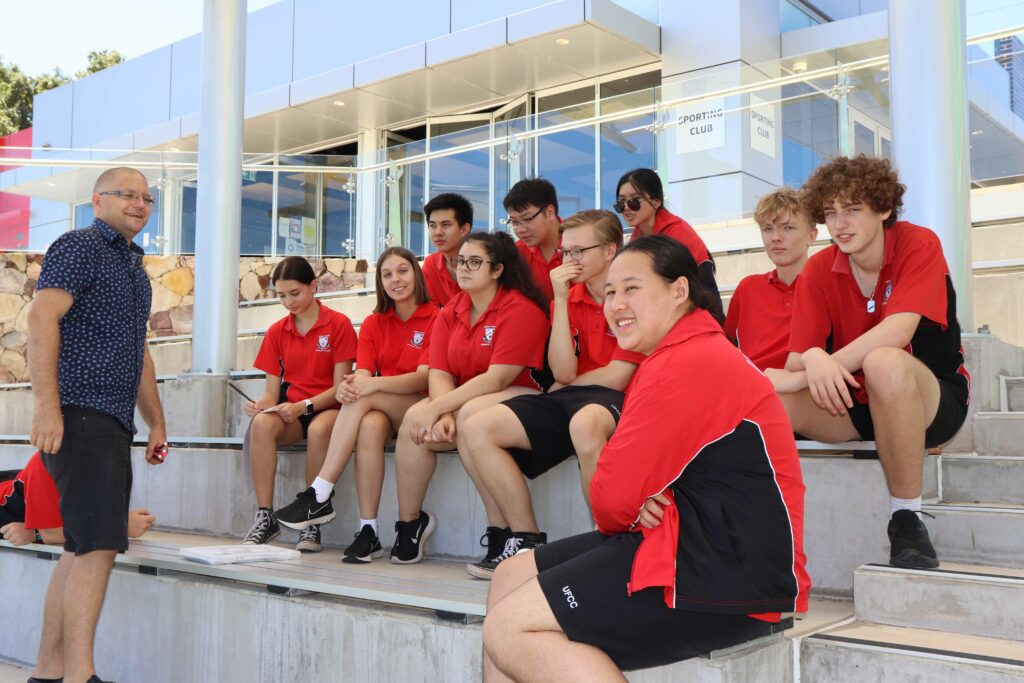 Year 10 is seen as a transition year from Middle Schooling to Senior Schooling. This transition process is supported by subject selection predicated on prerequisites. The prerequisites provide a foundation for success with further study. We also encourage students to make a realistic judgement about their progress towards these career goals. The introduction of prerequisites also supports the concept of 'making high school count'. Success at prerequisite study is a very good indicator of future success in a particular field of study.

Our aim is to ensure that students have the best possible chance of achieving success in the subjects they choose for study in Years 11 & 12. To this end prerequisites have been included for all Year 11 & 12 subjects.

Senior School students (Years 10 to 12) are exposed to greater control over their learning. This philosophy consolidates the student centred learning pedagogy used in Middle School. Students are encouraged to accept greater responsibility for not only what they learn, but also how they learn. A collaborative approach to the teaching-learning process is adopted where the teacher is a facilitator of learning.

The emphasis is on developing life skills such as problem solving, analytical thinking, time management, teamwork, and process skills. As students acquire these skills, they become more efficient and effective learners. Students are encouraged to become independent, self-motivated learners with well-developed research skills.

The Senior School model has allowed Ursula Frayne Catholic College to place greater responsibility in the hands of the student body. Any student who wishes to be part of the student leadership body of Ursula Frayne Catholic College are required to write a letter of application to the College Principal and complete an application form. Students are normally interviewed prior to appointment.

Ursula Frayne Catholic College has established an excellent reputation for the selection of its student leadership body. Invariably, the students in leadership positions have demonstrated outstanding leadership qualities and a level of maturity beyond their years. They set a wonderful example to the student body and have set high standards regarding their contribution to Christian Service Learning and their overall contribution to the College.

Students in the leadership body and Student Council work closely with a designated teacher and the Head of Senior School to ensure that the rights and responsibilities of students are maintained.